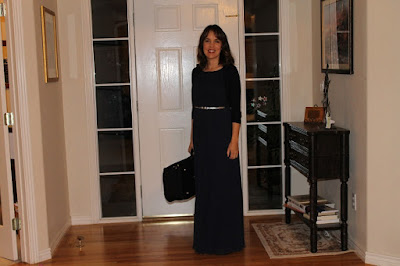 A few months ago, I was practicing at the church while my son attended scouts, and I ran into a friend in the hallway, who wondered why I had my violin with me.  I explained that I was preparing for a recital, and making the most of every opportunity to practice.  Instead of dropping my kids off and coming back in an hour to pick them up from various activities, I often try to find a room to practice in.  It's an effective method, because I practice differently when I'm not at home in my comfort zone.  Also, I'm usually left alone--an added benefit that I don't get at home!  Anyway, after going through that long explanation, my friend asked when my recital was.  When I told her it was a few months away, she expressed surprise that I was gearing up so far in advance.  I smiled to myself, because in my opinion, I hadn't started preparing for this recital soon enough!

Now, many great violinists have most of their repertoire readily at their fingertips, and they require a single rehearsal with their pianist before they hit the stage.  In fact, many premieres of famous violin pieces were sight-read, including the Beethoven "Kreutzer Sonata" which was on my recital.  (I honestly can't believe that it went that well.  The first concert was at 8 o'clock on a Saturday morning!  But who knows?  Maybe I'm wrong.)  But I'm not at that level.  As a mother of three kids who recently started homeschooling, it hasn't been easy keeping repertoire in my fingertips, and I haven't been able to add new repertoire as often as I would like.

When I was in college, I heard whispers from faculty that most Mormon moms never get very far in the music field.  They get married, have babies, and put their music on the back burner, only to pull out their instruments now and then for church.  I was determined not to let that happen.  Though I did have to slow things down drastically, I have always looked for opportunities to perform.  By far, my most favorite thing has been the Trebelle Piano Trio.  Playing with Heidi and Robyn is the highlight of my year.  Unfortunately, I have found that when I'm not preparing for a concert, I let myself get out of shape.  In an effort to break that pattern, I decided to put on this last Beethoven/Brahms concert.

Things were going well, but then in September, I hit a major roadblock.  I needed to go to the next level, but I was stuck.  I called my old friend and teacher, Geoffrey, and asked for a lesson or two. We worked on Brahms, and on the exposition of the first movement of the Kreutzer. I was feeling pretty confident. I needed some more time with him, but then I got really sick.   It's a long story, but suffice it to say, I was down for 10 days with excruciating pain, and unable to practice let alone take another lesson.  When I came out of it, I panicked with the realization that I had three weeks left until my performances would begin.  I confessed all of my anxieties to my sister, and then to God.  I prayed that He would guide me in my last push, and then I got to work.  Our homeschooling routine had to be simplified, and I had to rely on my children to do their work without my help.  My son stepped in and started taking over the housework.  That kid cleaned my kitchen, bathrooms, vacuumed the house--you name it!

My rehearsals with Robyn started to come together, and I was nearly ready.  There were three passages that were still eluding me, though.  I had only a few days to figure out what the problem was.  Robyn gave me one clue--I needed to take time to get my fingers where they needed to be.  She advised that I could control the time, rather than have the time control me.  She is brilliant.  After that, I found that I was doing a lot better in the practice room, but that whenever I played in front of anyone, nerves would kick in, and I'd blow it.  I needed to practice taking time, even when my heart was thumping and my hands were shaking.  I had an idea--I called up some people, and asked if I could play these tricky passages for them over the phone.  I kind of felt dumb, but putting myself in that vulnerable position was exactly what I needed to figure out how to nail those last few notes.

Now it was recital time.  First, Caldwell.  I arrived early and warmed up on stage.  I ran through those three passages.  They were fine.  People began to arrive, so I went backstage and waited.  The audience was small, but appreciative.  They laughed at my jokes, and applauded my performance.  We were thrilled with how well our first performance went.

Next came Boise.  It was hot.  I knew I couldn't get through the concert in the dress I was wearing.  I called Dave and told him to bring me a change of clothes.  And then I called Emmy and asked her to pick out the earrings.  Once again, we had a small, but appreciative audience.  Robyn and I played well again.  Our confidence was growing.

Then, Twin Falls.  At first, I wasn't sure how the recital would go over.  The acoustics seemed dead, and I wasn't carrying over the piano.  My worries were unfounded.  I have decided that the recital hall at CSI is designed to have the best acoustics when there is an audience.  And we had a full house.  Everything was going swimmingly, until I heard the sound of my three children running around backstage, squealing.  The sound of their feet told me that only the curtain separated them from the stage.  It was mortifying.  Believe me, there were consequences when it was all over and I could think straight!  In spite of everything, we received a standing ovation at the conclusion.

Finally, Robyn and I reprised our concert one last time at the Touchmark Retirement Home.  It is a beautiful facility, and our audience was so very gracious.  I loved that when I introduced the Kreisler, and began to talk about who Kreisler was, that I didn't have to--these people grew up hearing him play!  It was such an honor to play for them.

This experience has taught me so much.  Six weeks ago, I was asking myself if it was time to retire.  After all, only students give recitals!  What was I thinking, attempting this challenging music, knowing that it would be heard by so few?  But thanks to the support and advice of family and friends who listened to me play over the telephone, children who helped around the house, teachers and mentors, and especially Robyn, I was able to accomplish one of my life-long goals of performing this particular program, and I was able to do it beautifully.  I don't know what opportunities there will be for me in the future, but I'd like to seek them out, and keep this show on the road for as long as I possibly can.
Posted by Happy Thought, Indeed! at 9:50 PM