Go ahead and play the video so you can listen and read at the same time.
(I'm getting better at shameless self-promotion!)


When I was at the University of Utah, rehearsing La Mer by Debussy, our conductor, trying to help us better interpret the music, asked if we'd ever been to the ocean. I started to raise my hand (hasn't everyone been to a beach?), when I realized I had been land-locked for my entire life!

The first time I ever saw the ocean was when I was flying over the Australian coastline at dawn. (The 13 hours in the plane over the Pacific Ocean was over night, and completely dark. I did see some amazing stars above, though!) The ocean was in my backyard in several of the places I lived, but as a missionary, I wasn't allowed to go into the water itself.

Now, whenever I travel out of my land-locked state to the coast, I simply must pose in front of the ocean waves. I don't actually get in the water (not because I am holding on to mission rules, but because I'm a terrible swimmer, and I hate being cold and wet), but I'm enthralled by the vast beauty and the soothing rhythm of the waves. 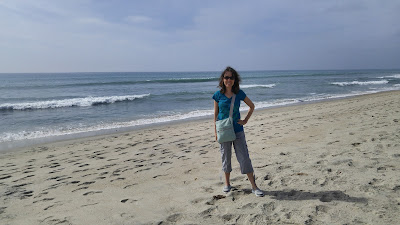